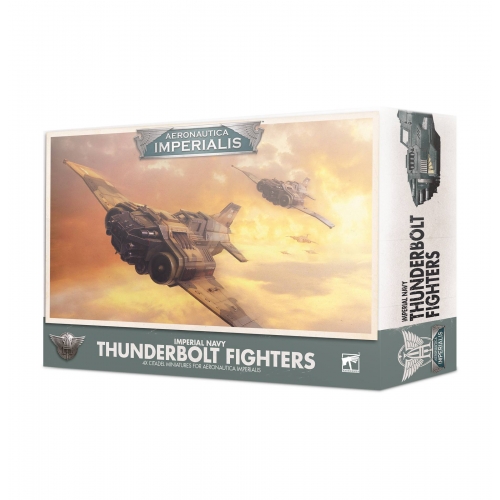 If aerial domination is your goal, then the Imperial Navy’s Thunderbolt Fighters are the answer. These versatile craft are equipped with twin lascannons for one-shot kills, as well as quad autocannons – or in the case of the Fury-pattern Thunderbolt Fighters, avenger bolt cannons – for shredding enemy flyers with gunfire.
The set includes:
- 4x multipart plastic Imperial Navy Thunderbolt Fighter miniatures (Any of these miniatures can instead be assembled as Thunderbolt Fury Fighters equipped with avenger bolt cannons instead of quad autocannons. The kit also includes a selection of hellstrike missiles, skystrike missiles and wing bombs to upgrade your miniatures with.)
- 4x Aeronautica Imperialis bases (each base designates the model’s front, rear and side arcs as well as speed and altitude dials. Each base also includes a clear stand to connect the aircraft to the base.)
- 1x Thunderbolt transfer sheet
You will need a copy of the Aeronautica lmperialis: Wings of Vengeance boxed game or the Rynn's World Air War Campaign Book to use these miniatures.

Taros Area of Engagement Board