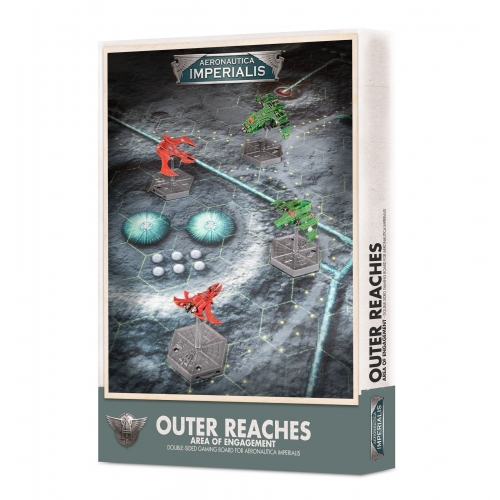 This Outer Reaches Area of Engagement is a fold-out game board for Aeronautica Imperialis that represents two different locations over which your air fleets can come to grips. Measuring 19 hexes by 18 hexes (or roughly 3’ by 3’), this game board gives you a huge area over which to fight your battles.

– Side 1: an Imperial Outpost depicts a remote colony on one of the countless worlds claimed by the Imperium, including the research facilities, settlements, and refuelling stations established on these distant planets.

– Side 2: a Lava World shows that no planet is inhospitable enough for the Imperium. This map depicts an Imperial settlement surrounded by burning lava – and these dangerous lands make air combat a crucial component of fighting for control of these planets.

You'll need a copy of the Taros Air War or Rynn's World Campaign book, or Aeronautica Imperialis: Wrath of Angels, Skies of Fire, or Wings of Vengeance boxed games to use this game board.