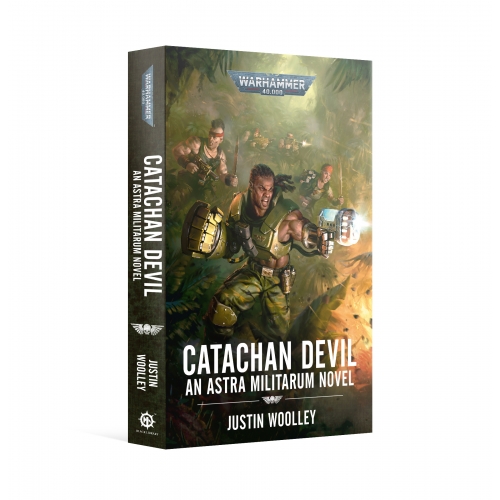 Colonel Haskell 'Hell Fist' Aldalon and the Catachan 57th Jungle Fighters arrive on Gondwa VI, a world ravaged by greenskins. The Catachans prepare to go on the offensive, but can they retake a vital outpost when saddled with the barely-trained Trooper Torvin – the last survivor of the Skadi Second Infantry?

Get up close and personal with the ruthless Catachan Jungle Fighters as they prepare to give up everything in order to claim victory.

When Colonel Haskell 'Hell Fist' Aldalon and the Catachan 57th Jungle Fighters arrive on the quagmire world of Gondwa VI, they find it locked in the grip of an ever-growing greenskin threat. Rather than shoring up the meagre existing defences, the Catachans elect to go on the offensive and retake the strategically vital Outpost Four. In the process, they are saddled with the sole survivor of the outpost's fall – the barely-trained Trooper Torvin, of the Skadi Second Infantry.

As the Astra Militarum clash with savage orks and Colonel Aldalon comes to terms with the cost of victory, Torvin finds himself under suspicion of cowardice by the Jungle Fighters. The young trooper's new comrades may be just as dangerous to him as the xenos marauders... unless, that is, he can pass through this trial by fire and earn the respect of the Catachan Devils.