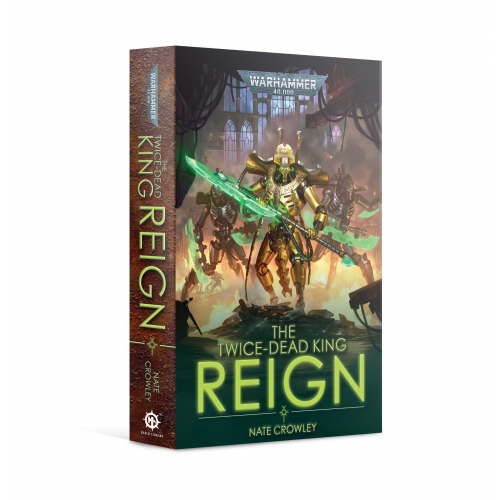 Follow the exploits of Oltyx, who – having finally seized the throne of the Ithakas Dynasty – now faces far greater threats, from within and without. He soon learns that the lessons of kingship are not quite what he had hoped.

READ IT BECAUSE
Experience the tumutluous reality of ruling a necron royal court and battling the the Imperium from the perspective of an necron lord whose mind is split into discrete partitions.

THE STORY
After centuries of exile, the necron lord Oltyx has at last been granted the thing he has always craved: the throne of the Ithakas Dynasty. Kingship, however, is not quite what he had hoped for – Oltyx's reign currently exists aboard the dying battleship Akrops, as it lumbers away from the ruins of his crownworld. Behind it is a hostile armada of unfathomable size, launched by the barbaric alien war-cult known as the Imperium of Man. And within the Akrops' sepulchral hold, an even greater threat festers – the creeping horror of the flayer curse.

Faced with such overwhelming odds, Oltyx leads a desperate voyage into a darkness so profound that salvation and doom look much the same. If he and his dynasty are to make it through that long night, Oltyx will have to become a very different sort of king.

Urdesh: The Serpent and the Saint (Paperback)