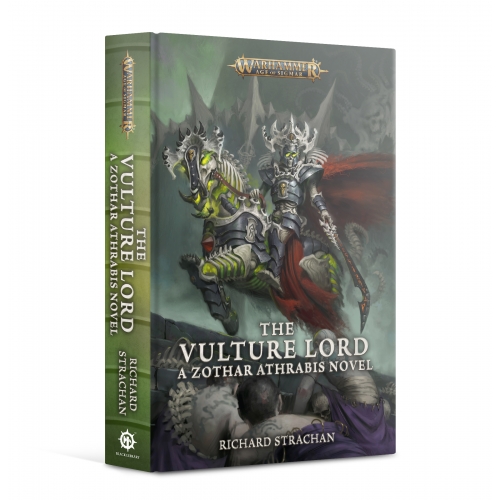 Zothar is an Ossiarch Bonereaper who rules over a city in Shyish. He struck a bargain with Nagash to preserve the soul of his dead son, choosing a new host from the victor of the Games – a festival that takes place once each decade. When Zothar breaks tradition and raises Lycus, the current champion, as his own son, his actions incite a bloody rebellion amongst the citizens.

It’s a fascinating look at what passes for normal life in the realm of Shyish, where the living and the dead walk side by side, and everyday existence is filled with danger, adventure, and no shortage of bizarre and mystical creatures.

THE STORY
In a forgotten corner of Shyish, the city of Lament prepares for the most important festival in its calendar, the Games – a series of events that will seal the fate of their victor.

Following the tragic death of his son many centuries ago, the cruel Vulture Lord, King Zothar Athrabis, made a terrible bargain with Nagash to preserve his child’s soul. Now, once every 10 years, the new champion of the Games must become host to the boy’s tormented spirit, while the old vessel is condemned to death. Most citizens of Lament deem this a great honour, but when the city’s newly crowned champion, Lycus, is taken by the king to raise as his own, his family question their sacrifice.

As the years pass and a new decade looms ever closer – and with it Lycus’ grisly fate – the Prince of Athrabis is caught between his duty to his new father and the prospect of escaping death to return to his old life. As fierce, bloody rebellion ensues, and Lycus is exposed to violent truths, he must decide once and for all where his loyalties lie.